I started using Camtasia way back in 2003, when it was this interesting new software that allowed you to record your computer screen. Since then, technology has changed at a dizzying pace. But for Camtasia, change has come at a much slower pace…often with years passing and no notable changes whatsoever.In 2009, Camtasia released a version for Mac. Unfortunately, it was more or less a knock-off of an already established and very popular competitor on the Mac (Screenflow). And for the next 7 years, it languished largely unchanged.

In 2012, Camtasia released a major revision for Windows users…Camtasia 8. For the first time, Camtasia could be used for more than just recording your screen…it could be used to edit on-camera video too. But as a tool for on-camera video, it still lagged far behind what other tools had been doing for years. And for the next 4 years, it languished largely unchanged.

So in 2016, when Camtasia announced that new versions were coming out for both Windows and Mac users, I was less than excited. After all, Camtasia already had a history of painfully slow updates…and when those updates did come out…they contained features that had been available in competitors’ products for years.

But my indifference quickly changed to excitement the very first time I used the “new” Camtasia. Why? It was good. Like, really, really, good. So what had changed? Just about everything.

In fact, if I had to sum up the new Camtasia in a single sentence, it would be…

First, it’s soooooo much faster (thanks to it finally being 64-bit) . Moving around in it is faster. Creating videos in it is faster. And exporting those videos is faster too. A lot faster. It seems to handle everything you throw at it with ease…including 4K video.The interface has been completely redesigned. And for maybe the first time in the history of video editing software, it’s an interface that gasp…is human friendly. You don’t have to hunt through stacks of confusing icons to figure out what to do. Instead, everything is displayed front and center, in plain language.

Even more, it looks and works the same whether you use Windows or Mac. Typically, software looks and works completely different on Windows and Mac. Which means if you’re switching from Windows to Mac (or vice-versa), you have to completely re-learn your favorite software. But not so with the new Camtasia. They’ve done something that only the big-boys (like Adobe) have been able to pull off…make software that’s nearly identical on both operating systems. And they’ve done it at a fraction of the cost the big boys charge.

Then finally, there’s maybe the biggest change of all…they’ve made is easy for people (of any skill level) to create polished, professional looking videos without pulling their hair out. Whether you’re doing screen recordings, on-camera video or a mixture of both, you can drag and drop your way to creating gorgeous videos in just minutes (videos that would normally take hours in expensive, Hollywood-level software).

To put it plainly, Camtasia has been able to accomplish something no one else has; they’ve made short work for anyone wanting to create beautiful videos…without hassles…and complete with all the effects, graphics and animations you can imagine…

All of these new changes…this complete re-design…required that Camtasia be re-built from the ground up. It looks different. It works different. It is different. And that means there will be a learning curve when it comes to using it (especially if you’ve used older versions of Camtasia). 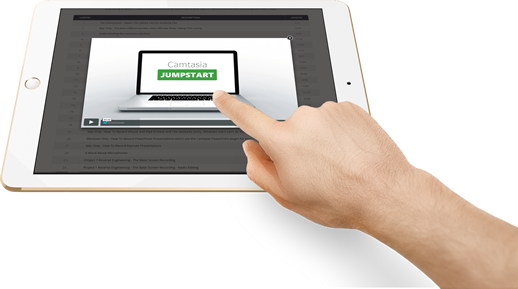 Look, I’ve been using Camtasia since 2003 (along with every other video editing tool out there) and even I was a little stumped when I started using the new Camtasia. And if it could stump me, I can only imagine how other people might be totally lost when they use it.

So I decided to put together a complete, A to Z training course on the new Camtasia. I call it Camtasia Jumpstartfor Windows and Mac. In it, I not only walk you through everything you need to know about using Camtasia, but how to use it to create real-world videos. No theory, just pure application.

This course is the all-in-one, here’s everything you need to know resource for both Windows and Mac users. And it’s designed to get you up and running as fast as possible. No boring lessons about mundane features that you’ll never use. Instead, the lessons are laser-focused…here’s what this feature is, here’s how it works and here’s how to use it in your videos.

That’s nearly twice as long as my “typical” training courses. And that’s because I wanted to make sure that I covered everything you need to know about creating real-world videos…in detail…in Camtasia.

Which is why I also include 3 separate projects in the training, where you get to see completed videos reverse-engineered to learn exactly how they were created in Camtasia. These projects cover how to create screen recordings on steroids, how to combine screen recordings and on-camera footage to create dazzling presentations and how to create pro-quality animated videos in just minutes (videos that would cost you thousands to have made). Plus, you can even download the project files and use them to follow along with the training (no guesswork for you).

In addition to these invaluable, “see-how-it-was-done projects”, I also cover everything else you’ll need to know about the new Camtasia, like:

Oh, by the way…see that image that keeps moving on your screen? That’s an animated GIF file, created in Camtasia from a video. Yes, you can do that in Camtasia. And you’ll learn how to do that too…

There are no reviews yet.